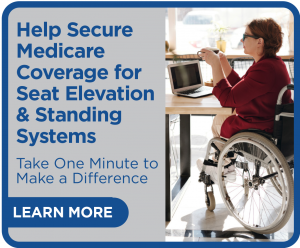 NCART has been working with the ITEM Coalition to secure Medicare coverage for Seat Elevation and Standing Systems used with Complex Rehab Technology (CRT) power wheelchairs. Evidence shows these CRT systems provide significant medical benefits and enable people with disabilities to be much more independent in their home and community settings. They should be covered within the Medicare program.

A formal request was submitted to CMS in September 2020 to establish Medicare coverage and this request was officially “deemed complete” in November 2020. Unfortunately, the CMS review of the coverage request has not formally progressed since that time and it needs to be moved forward.

Click the link below to share the letter with your representative and ask them to add their name to support CMS moving forward with their review of the coverage request.

Ask your representative to add their name to support CMS moving forward with their review of the coverage request. 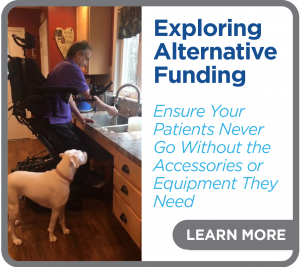 Exploring Alternative Funding: Ensure Your Patients Never Go Without the Accessories or Equipment They Need

Whether it’s an insurance denial to needing to an upgrade, your patients should never have to go without the accessories or equipment they need. A number of alternative funding sources are available to your patients, regardless of the reason.

Focused on empowering strength and independence, the Permobil Foundation achieves this goal in many ways, including donations of products and accessories during the application process. Learn more at permobilfoundation.org/requests

Dedicated to helping fund technology for ALS clients, Team Gleason offers assistance through a seat elevator grant. Your patient’s care team can work with them and Team Gleason during the application process. Learn more at teamgleason.org

The foundation offers a variety of grants and assistance programs. Learn about MS Focus’ assistive technology program at msfocus.org/gethelp

This nonprofit provides help to maintain self-sufficiency in times of difficulty, as well as assisting with disability and medical needs. Learn more at friendsofman.org

A state can choose to waive certain Medicaid program requirements, allowing the state to provide care for those who would not otherwise be eligible. Learn more about what your state has to offer at Medicaid.gov by searching “state waivers”.

Every state has a vocational rehabilitation agency designed to help individuals with disabilities meet their employment goals. Learn more at askearn.org/state-vocational-rehabilitation-agencies

Lines of credit specifically designed to help offset medical costs are also available. Most offer longer term healthcare financing, while some include no-interest plans. These options include: 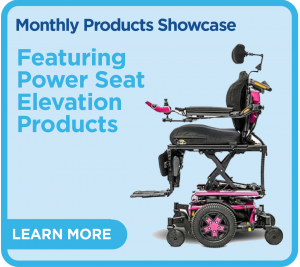 Power seat elevation allows the user to raise and lower the height of the seat of a power wheelchair, using an elevation mechanism often controlled by a joystick or button. While wheelchairs help you get from point to point, seat elevation devices help you move through a three-dimensional world with a little more ease, from reaching tall cabinets to enjoying a conversation with a friend.

Less strain by ensuring you’re at a better angle to reach, see or navigate.

Social and psychological benefits such as increased self-confidence and independence.

Increased safety by helping you see more clearly when navigating through a large crowd or crossing a busy street.

If you think seat elevation might benefit your patient, here are the steps they should take:

Talk to your patient's ATP and care team: If your patient uses a power wheelchair with a standard seat height and experiences difficulty transferring, reaching high enough to access areas at home, school or work or they have difficulty seeing to navigate crowds or safely cross the street, they may be a good candidate for seat elevation.

Document the need: Since all power wheelchairs and recommended options require prior approval, work with your patient's healthcare provider, ATP and other members of their care team to document specific ways seat elevation would benefit them and have them submit the necessary documents to their insurance provider.

Know their resources: If your patient's provider does not cover seat elevation, there are many other options available. National Seating & Mobility also offers an everyday low price program for self/private-pay seat elevation orders that makes the option more affordable and available to more people. 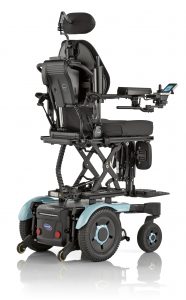 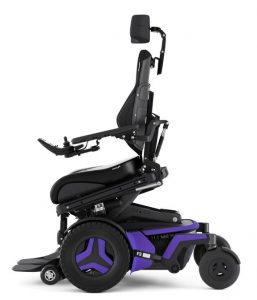 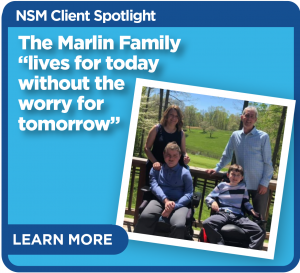 Client Spotlight: The Marlin Family "lives for today without the worry for tomorrow"

For four years Jonah Marlin developed as any child his age would. Then, something changed. His parents, Terry and Sonya, noticed him struggling with a few things he hadn’t before and decided a visit to the pediatrician was in order. The doctor, also concerned, referred the family to a specialist. The shocking diagnosis of Duchenne Muscular Dystrophy (DMD) came one week before Christmas in 2008. DMD is a fatal genetic disorder characterized by progressive muscle degeneration and weakness. Realizing that DMD was a genetic disease typically affecting boys, the Marlins also had their two-year-old son Emory tested. He too was diagnosed with DMD.

Jonah is now 17 and Emory is 15. The challenges they face as the disease progresses continue to evolve. While Jonah is doing well overall, he has zero muscle function and worsening painful scoliosis. He will have spinal fusion surgery involving the placement of two rods to correct his curved spine in the near future. Emory is expected to have the surgery first though this fall following a recent G-Tube surgery to strengthen him beforehand.

Driven by the motto “live for today without the worry for tomorrow,” the family still prioritizes living life to the fullest each day, even if that means focusing on the small things that bring joy. Terry says they reflect on the peak moments when they are in the valleys along their journey.

The family’s favorite activity has always been traveling. In the last three years alone they’ve been to Disney World, Chicago, Hawaii, Breckenridge, Destin, Florida, London and Paris. Though these trips provided wonderful memories, they also included some challenges associated with the general inaccessibility of the world, something Terry openly discusses in an effort to drive awareness and advocate change.

Emory’s pain and the COVID-19 pandemic have sidelined some of the family’s plans. While the boys have been able to continue to receive care during this time, the required surgeries are difficult because they can’t be together. As the family observes the worldwide uncertainty brought about by the pandemic, they are already well aware of the life-changing impact of a fatal disease with no cure. Their world-changing COVID-19 event happened in 2008 when their boys were diagnosed with DMD. But they know that most people don’t realize the difficulties in life until their lives are affected personally.

The Fight DMD foundation the family established to fund research in the hopes for a cure has now raised over $1.4 million. The foundation was recently awarded the first DMD cardiac trial, called the FightDMD trial, involving a partnership with Vanderbilt Children’s Hospital and Cumberland Pharmaceuticals along with several other sites in the U.S. They remain hopeful about some of the DMD advancements such as the Exon 51 Skipping trial, Crispr/Cas9 and the Exon 54 trial currently in development that could be beneficial to both Jonah and Emory.