Thank You for Your Partnership: Please take a short survey to ensure we provide what's most important to you in 2022

Thanksgiving serves as a time for us to reflect on our lives with gratitude. Although this year has brought many challenges, it has also brought us together. We are honored to work alongside you to help your patients gain more independence and achieve better health outcomes associated with their customized mobility solutions.

We started the Monthly Minute a couple of years ago to provide you relevant mobility and accessibility content to better serve your patients. To ensure we are providing you content that you prefer, please click here to take our four question survey.

Thank you for trusting us to serve you and your patients. Because of you, many are able to give thanks for greater mobility, safety and improved health this year. 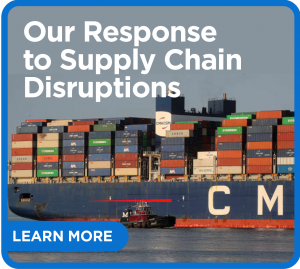 Our Response to Supply Chain Disruptions

Our top priority is to provide your patients with the products and services needed to help them move through life, but obtaining the components and equipment needed to do so has become increasingly difficult over this past year.

As you have probably noticed, supply chains for nearly every industry, from automotive to grocery, have experienced slowdowns. The slowdowns are caused from a range of challenges including; timing to bring parts and products into the U.S., availability of raw materials, transportation constraints and labor limitations.

We are doing everything we can to navigate these challenges including working with our suppliers and logistics providers to understand where they are experiencing delays. This allows us to adapt where possible to minimize the impact on our customers’ orders.

Every day, we are actively managing our orders to ensure your patients get what they need as quickly as possible. In general, our turnaround times for most orders are delayed by one to three weeks. You can check the status of your patient's order on the Healthcare Provider Order Status Portal, which can be found here. If you have any questions or concerns, please reach out to your local branch or Assistive Technology Professional (ATP).

Starting tomorrow, we will be communicating a similar message through the following communications channels, including; text messages to clients, on our website, on mynsmorder.com, in our welcome packets and on all of our social media channels.

We truly appreciate your partnership and patience as we work through these challenges. Thank you for allowing us to serve you and your patient’s mobility and accessibility needs. 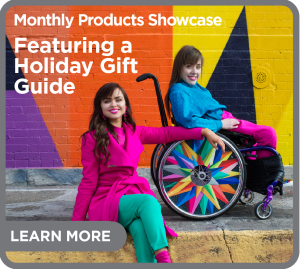 Christmas is fast approaching and the holiday shopping season is fully upon us. If you’re shopping for someone who has a mobility device, this is the list for you. From wheel covers to cup holders, to backpacks and everything in between, we've got you covered with our holiday gift guide.

Spinergy Rear Wheels are sure to keep your loved one moving through life.

The Pride Mobility cup holder is both functional and convenient. If you remember the days before cupholders were standard in cars, you can appreciate a dedicated drink corral.

An extra Permobil Wheelchair Cushion makes a great gift to ensure your loved one has a backup cushion to ensure they are always as comfortable as possible in their wheelchair.

Newton Airgrip Hand Rims by Motion Composites lightens your wheelchair while adding a splash of color and personal style.

The Pride Mobility XLR USB Charger ensures your loved one is always connected. The charger, which plugs into the mobility device, is compatible with most Apple and Android phones and tablets.

Permobil's SmartDrive gives your loved one the freedom to do more. It moves with them and it's so lightweight, they won't even know it's there. They can spin in place, be in a wheelie, or hop off curbs. It is compatible with your loved ones active lifestyle.

Izzy Wheels are both functional and fashionable and with over 90 collaborations with well-known designers and brands, including Disney and Hello Kitty, Izzy Wheels has something for everyone.

The Ki Mobility Backpack is stylish, functional and a secure storage option for your belongings. This backpack has a total of 7 storage compartments. Inside, a 1.5 inch zippered padded storage pocket is a great place to hold a laptop or tablet. Mesh pockets on either side of the backpack are perfect for water bottles, cell phones, glasses cases, and more.

The Ki Mobility Underseat Pouch is compact and is simple to attach/remove as needed. The 8.5 inch x 6.5 inch size makes it perfect to hold small personal items like your keys, wallet or cell phone. A large ring on the zipper making opening and closing the pouch easy. 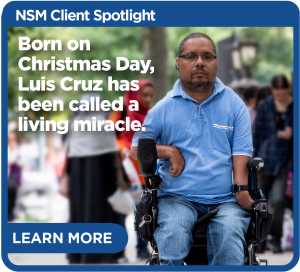 Luis was diagnosed with Arthrogryposis in utero, a congenital condition causing curvature of the joints. Despite a fateful prognosis, Luis continues to thrive as a successful adult living in the Bronx, New York.

“When I was born, the doctors told my mother that I wouldn’t amount to anything,” said Luis. “They said I would die by three years old, but here I am at 47.”

While severe cases of Arthrogryposis affect fine motor skills, Luis defied his doctors’ expectations and is able to write, sketch and even walk on a limited basis.

“When I was in high school, I requested to be moved out of the special education class,” said Luis. “After moving into the new class, I parked my chair, got out my notebook and got ready to write. The teacher thought I shouldn’t be in that class, so he wrote quickly, covering all three chalkboards. My friend said he had never done that before. It was at that moment that I put my pen in my mouth and started to write.”

Luis has been writing that way ever since. He has authored multiple comic books, available on Amazon, and has two novels currently in process.

“I’ve worked with two or three artists, but have narrowed it down. I write more in a script form with dialogue and a description of what I’m seeing in my mind,” he said. “I sketch it and send it to the artist.”

Not only creatively inclined, Luis is an entertainer at heart, performing his comedy show – Stand-Up Comedy from a Sitting Down P.O.V. – at famed comedy clubs including Broadway Comedy Club and Dangerfield’s in New York City. He’s even started being recognized at local events!

“Last year I went to New York Comicon as a spectator,” said Luis. “I’m standing in the lobby when this guy passed by and said, ‘I’ve seen you before.’ I asked if it was because of my comic books and he said ‘no it’s because I know your comedy and you’re very funny.’ He asked if he could take a picture with me.”

In addition to his artistic endeavors, Luis has worked with young children as a group leader for an after-school program for more than 25 years.

“Now I write lesson plans,” said Luis. “I have the little ones, ages seven and eight. I try to mix it up.”

With a busy schedule to maintain, mobility is imperative. National Seating & Mobility’s the Bronx branch helps him stay on the go.

“Mobility means freedom,” said Luis. “It means the liberty to not be in one place. I can go anywhere I’d like, anytime.”

Determination, perseverance and what he sees as a handful of miracles have shaped Luis into the successful creator he is today.

“I wish I could see those doctors now,” Luis said.