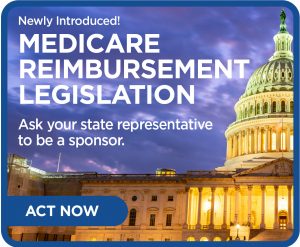 Medicare Reimbursement Legislation: Ask your state representative to be a sponsor.

Reps. Markwayne Mullin (R-Okla.) and Paul Tonko (D-N.Y.) are leading the effort to provide a much-needed adjustment to Medicare reimbursement rates to reflect the rising product and operational costs for HME suppliers since the last completed and implemented competitive bidding round in 2015.

These HME champions have now formally introduced HR 6641, legislation that applies a 90/10 blended Medicare reimbursement rate for items in the 13 product categories whose bid results were not implemented in Round 2021.  These increased rates would apply from Jan. 1 2022 through Dec. 31, 2023.

You can help move this legislation forward by asking your Representative in the House to add their name as a co-sponsor for HR 6641.

The most effective way to support this legislation is to send a brief, personally drafted e-mail to your Representative’s staffer who deals with healthcare issues. Click here to view American Association for Homecare (AAHomecare)'s Campaign Central page for resources and messaging to help you contact your House member directly. You can also encourage send a pre-drafted message to your Representative by clicking here.

Your outreach and engagement are essential to securing Medicare reimbursement rates that reflect the product and operational cost environment facing the HME community. 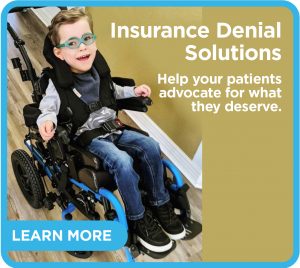 Insurance Denial Solutions: Help your patients advocate for what they deserve.

An insurance denial can be devastating, particularly when it’s for the complex rehabilitation technology (CRT) that keeps your patients’ daily lives in motion. But even when they’re faced with a refusal to cover the equipment they need to live life to the fullest, they can take steps to advocate for themself. Here’s how.

Make an official complaint. If your patient's insurance provider denies their claim, the first step is to work with them and the rest of their care team to file an appeal with their insurance company. They can also file grievances or complaints with various city and state departments (look for the department of health or offices with a focus on those with disabilities) or their state’s attorney general. | naag.org/find-my-ag/

Do some research. City and state governments often have departments that provide resources to those in the disability community. Local organizations and advocacy groups may also be able to guide your patient. The Administration for Community Living website provides detailed information regarding state aging and disability networks as well as protection and advocacy groups. | acl.gov

Reach out to your representatives. Have your patient contact their elected officials at both the state and federal level, share their story and ask for their help. If they need help finding their names or contact information, consult USA.gov. | usa.gov/elected-officials

Be persistent. Nothing about this process is easy, comfortable or fun, but your patient is their very best advocate. Only your patient and their care team can fully explain how the denial affects their daily life, and it may take a while to make their voice heard. 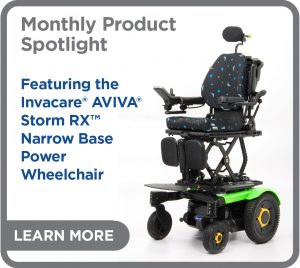 The narrow base model offers several new features compared to the standard version of the AVIVA STORM RX, a next generation chair launched in August 2021, including:

“I’m excited about the many benefits the narrow base adds to our already impressive AVIVA STORM RX lineup, the only next generation rear wheel drive power wheelchairs that truly have 4 wheels on the ground. Initial feedback from our end-users has been overwhelmingly positive, with the narrow base providing additional maneuverability and navigation that even outperforms some mid wheel drive chairs on the market today. I truly believe that this chair provides our end-users with best-in-class ride quality and the peace of mind to safely navigate multiple environments without having to worry about what is behind them,” commented Ann Quigley, VP of sales, Motion Concepts, a division of Invacare.

The AVIVA STORM RX series is an innovative leap forward in our rear-wheel drive power wheelchairs, focused on improving the experience for end-users through design, technology and performance.

Design
With its sleek base, the flared front end supports use of the center mount foot platform for overall turning radius reduction, enables the legs to tuck under the chair, allows a user to get closer to their environment, and facilitates easier stand pivot transfers.

Technology
Rehab-redefining LiNX® technology continues to enhance the set-up process with new and improved features. From pre-set programming parameters, to live wireless programming, to integration with ASL specialty controls, set-up is as simple as turning on the LiNX remote. Standard LED lighting system helps users illuminate the area in front of them.

Performance
With a short wheelbase and narrow width, the AVIVA STORM RX gives a compact base footprint for excellent maneuverability.

The all-new patent-pending Invacare SureGrip™ suspension system helps provide a smooth and quiet driving experience indoors and outdoors. A rear anti-tipper utilizes a shock absorber to help respond to vibrations and noise, providing a smoother, quieter ride. The drive motor is pushed down for better traction as the rear anti-tipper is engaged over a bump and the front caster bearing has an elastomeric dampener to help reduce vibrations and impacts. 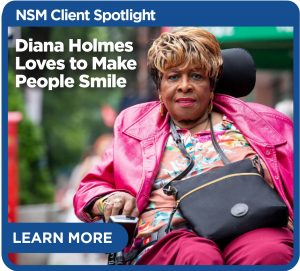 Navigating life in the bustling city of the Bronx, native New Yorker Diana Holmes doesn’t often meet a stranger. Her joy is infectious, and she loves to make people smile.

Diana’s deep-rooted love for the Bronx has been present since childhood. She grew up surrounded by her family, with grandparents, aunts, uncles and cousins all living in the same building. It was a close community where neighbors of varying nationalities knew each other well and became extensions of family.

Growing up, Diana loved sports, especially paddleball, and regularly visited the local park to play with friends. During one game, she sustained an injury that ultimately required reparative surgery.

“I had a torn ligament in my knee,” said Diana. “When I went to have surgery, there was a surgical error and an artery was severed. It wouldn’t heal, and I was very sick. I wound up having to have my leg amputated below the knee.”

Despite having to relearn to walk, navigate life with a prosthesis and ultimately transition full-time to a power wheelchair, Diana refused to let her spirits fade.

“My chair saved my life,” said Diana. “My power chair takes me to different stores and different places. I don’t have to depend on anyone. I can’t get around as easily as I used to, but I still get there.”

One of those places is Arthur Avenue, a street where Italian families have owned authentic restaurants and shops for generations. As she navigates the historic bakeries, meat markets and delis, she is met with a warm embrace from the owners and patrons who have become family.

Diana also enjoys attending concerts, shopping, and visiting City Island for seafood with her daughter and granddaughter. Although she misses the building she grew up in, she loves to watch the boats pass by from her apartment terrace.

Diana radiates light throughout her community, and when possible, offers support for fellow amputee patients.

“I used to sit with groups of other amputee patients. I would tell them they have to keep going because tomorrow is not promised,” said Diana. “I get where I want to go. I still have my sense of humor. I’m alive and loving life.”